One of America’s favorite snack foods has a long history behind it, from the initial discovery, to all the different ways we make popcorn today. We love our flavors of course, and we also know that most of us, have popcorn in our homes for the quick convenience when we are in the need of a healthier option of a snack, or just are in love with popcorn. In fact, over 90% of American’s eat popcorn at least once during the average year.

When popcorn was first discovered in the late 1800s, people tried all kinds of ways to make the delicious treat. Some individuals attempted to cook popcorn over a fire in a kettle, while others would simply throw the popcorn kernels in hot ashes from a leftover fire. The first actual popcorn popper came on the scene in the year 1893. The inventor of the ingenious creation was a businessman from Illinois named Charles Cretors. The first machine was designed to roast peanuts outside of his bakery, but he improved the design and ended up with a steam-powered machine that could pop popcorn in its seasonings. He designed a mobile popcorn machine to make it easy for street vendors to sell popcorn. He took the machine to Chicago's Columbian Exposition in 1893 and it was a massive success, with people lining up to purchase bags of fresh popcorn.

When did the classic microwavable popcorn come about? Microwave popcorn was invented in 1946 by Percy Spencer. Spencer had helped to develop the microwave oven during World War II, in a total fluke when he discovered during some testing of a military-grade magnetron melted a chocolate bar in his pocket. From this, he experimented with other foods to see what would happen, and one of those foods happened to be popcorn. It is probably true that microwaved popcorn was invented before the microwave machine itself.

Microwaveable popcorn is so popular today that most microwaves have a popcorn button to pop your favorite snack fast and easy! The microwavable popping bag came out in the ‘70s and became a staple in grocery stores, as the microwave oven was introduced to the public in the late 1960s. As the price of microwavable popcorn decreased in the late ‘70s, its popularity in households grew. 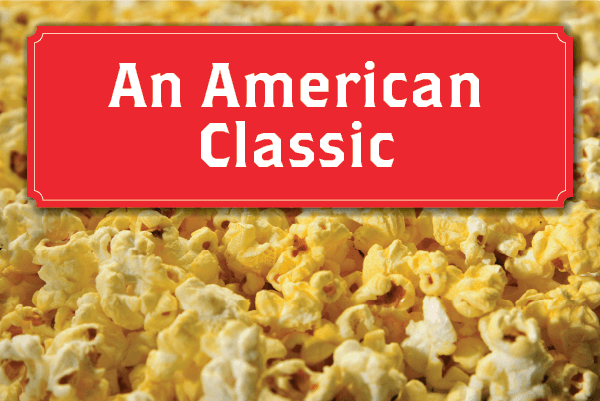 Other ways of popping popcorn have come about such as the air popper. The air popper hit the scene in 1970 and creates extremely hot air to pop the popcorn kernels. This was an easy way to pop popcorn, and it did not involve the way people made it before, which was by cooking it on the stove, cooked in oil. This was a healthier way to eat popcorn and came upon a time when microwavable popcorn was also hitting the market. It could be said this was a good alternative until microwave ovens became something most homes would have.

Who would have thought that there is so much history to popcorn? Our favorite treat has been around for thousands of years and counting! Go share your new popcorn popper facts with your friends and don’t forget to try America’s Favorite Gourmet Popcorn!

For the latest news, flavors, recipes, & specials, enter your e-mail address below.

For the latest news, flavors, recipes, & specials delivered right to your e-mail, enter your e-mail address below.

By clicking enter you are verifying that you are old enough to consume alcohol.

Your cart is currently empty.